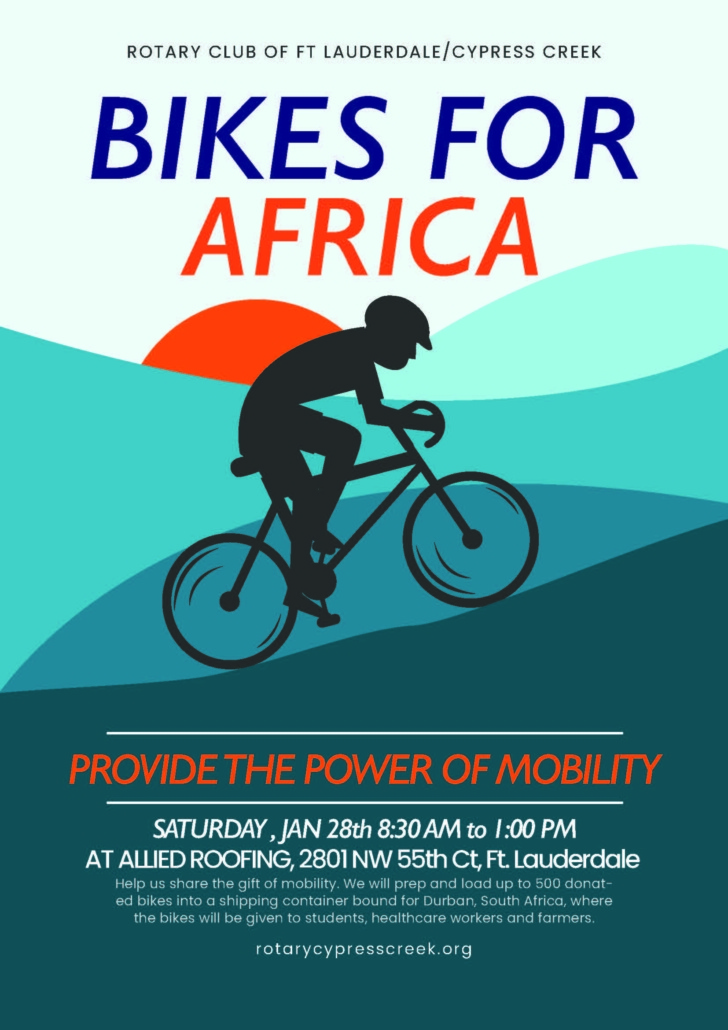 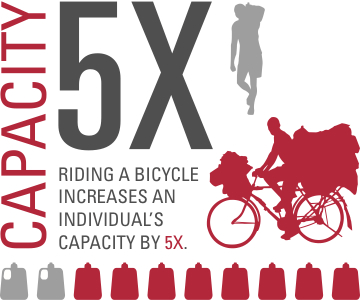 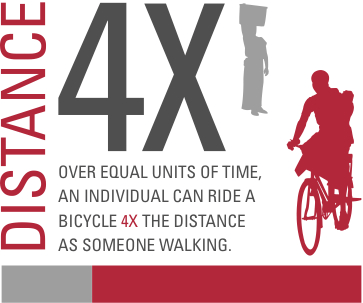 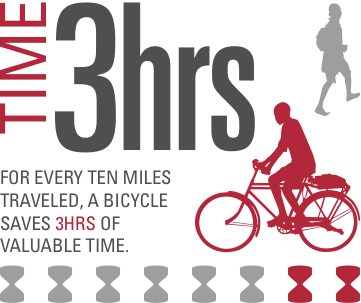 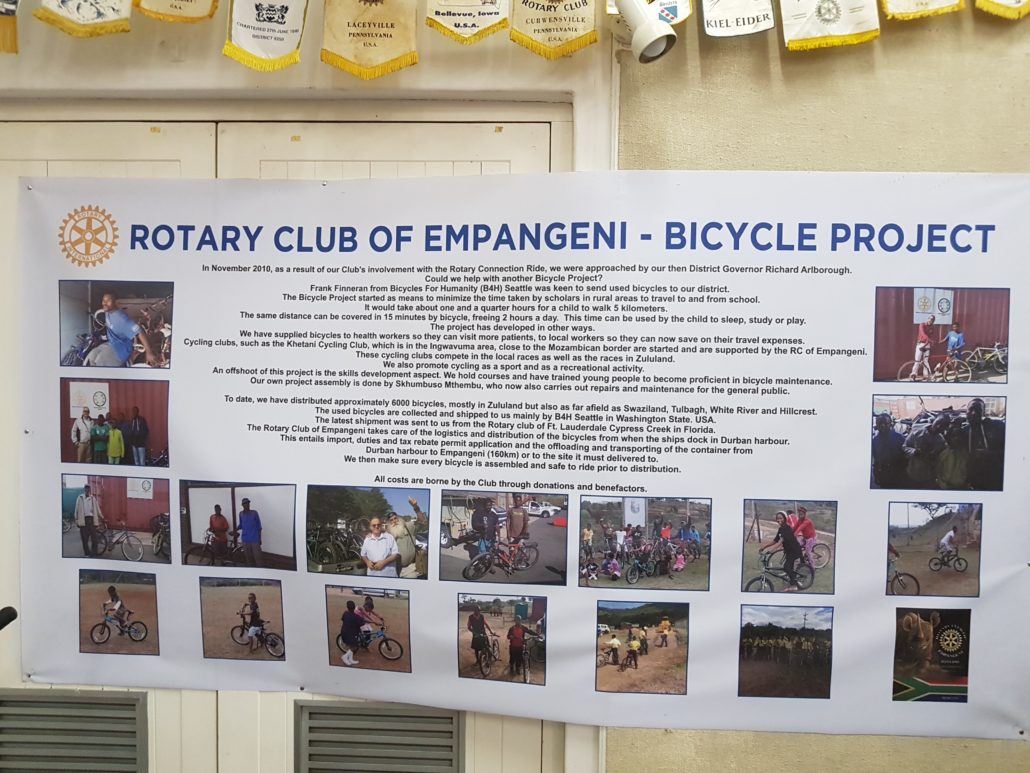 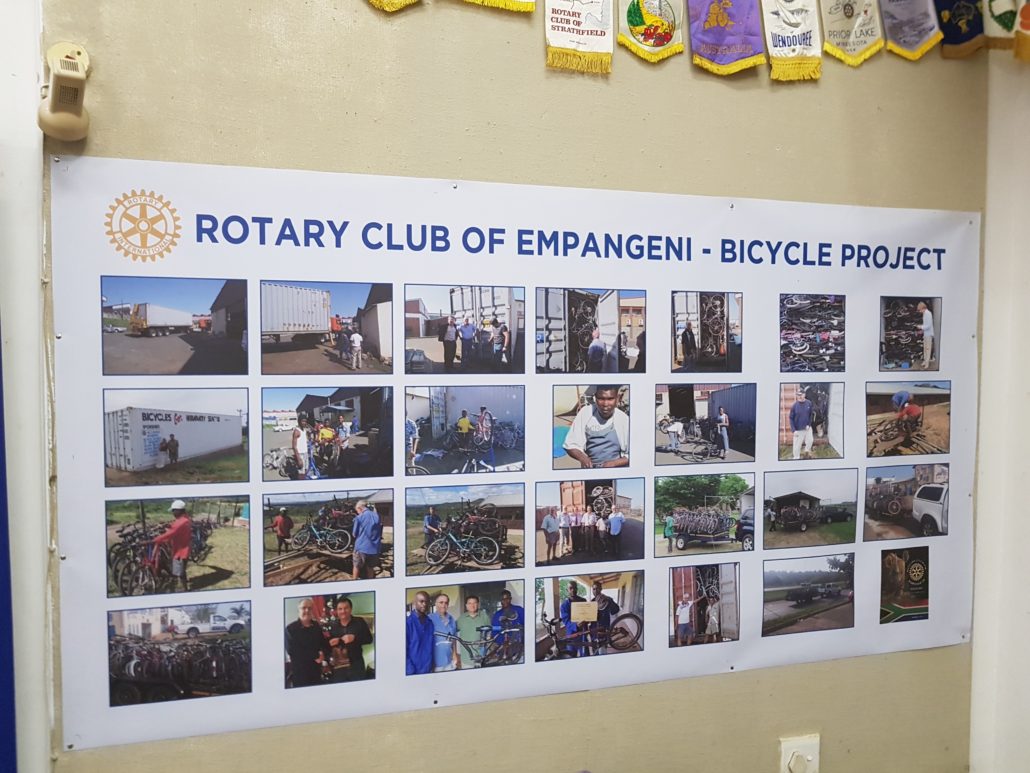 We want to thank you and your team for the donation of bicycles from Rotary Club Empangeni. I think I can write a long letter of what joy it brings to the kids but nothing says it more than a photo or being there when they receive the Bicycle. 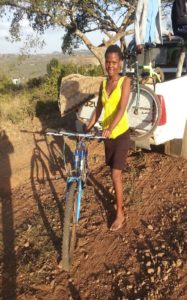 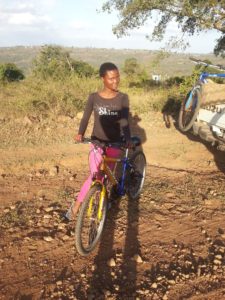 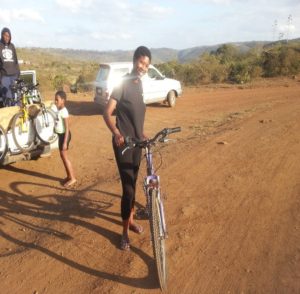 This time I have given the bicycle to girls first. Whenever I am looking for people to help me with managing races the three girls are always first to come forward. This year I hope to see them taking part in our races. They are so excited to have their bicycles. 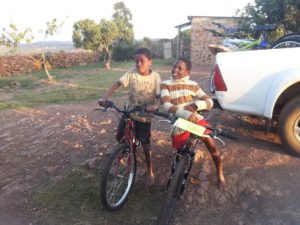 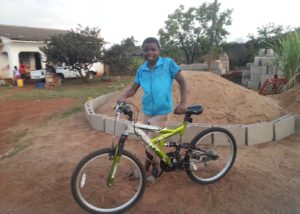 The young boy on the left has only recently joind our club. When receiving the news he would be taking part in some of the races this year the teachers have reported to me there has been such a change in his attitude at school. He is working much harder and his confidence levels are up. His friend on the right received his bicycle from us last year and now this year he too has been selected to take part in some of the Bell Big Five Races.

The proud owner of the green and silver bicycle is our junior champion. He has been winning our local 10km races on a BMX bicycle. As you can see in some of the pictures our roads are rough and tough. He was over the moon when he received his bicycle. 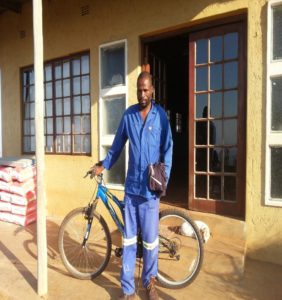 Another Bicycle went to a much older person. This will be such a blessing for him. This will help him to get around much quicker. The closest shop to his house is 5km away. 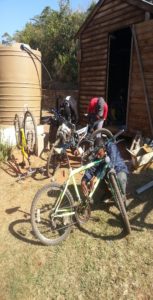 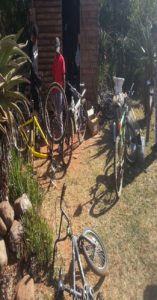 This is some of the guys at my place repairing bicycles. Some of the things they do to keep the bicycle on the road is crazy. If a cable brakes they will take the cable, tie it together at the brake and use them again.  If they have no tubes they take an old tyre, cut of the edges (the part that fits into the rim) put the old tyre into new but used tyre and fit that to the rim. Some stuff is just hard to explain.

The donation of tyres, cables, seat, tubes etc all have been used and the old dangerous stuff thrown away.

What does this all mean for these kids?

By been shown how to repair the bicycle they are all taught a skill.

To most people R40 for a tube is nothing but for these kids’ parents it is everything when you consider R40 buys 3 loaves of bread. The average family in our community gets about R75 a day. Their parents can’t afford a bicycle tub, they definitely can’t afford a bicycle for their kids. This donation of bicycles has made a child wish list come true.

The most common sport is soccer or netball and most the kids in the cycling club don’t make it into the local soccer team. You can only imagine what this does for them when they are part of a cycling team. At school they quite proud of the fact the kids have labelled them as “Those cycling Kids”, they in a team and they all stand up for each other.

Recently one of the kids was in an accident while cycling. It was not his fault, a car was trying to overtake on the wrong side of the road. The driver of the car is a teacher and has been causing trouble our cyclist at school. Fortunately all his cycling buddies have stood up for him and put a stop to the victimization by the other kids. Another teacher who witnessed the whole incident has also come to the aid of the young cyclist. It is a sad story but for the young man he has realised the support he has from his cycling buddies. 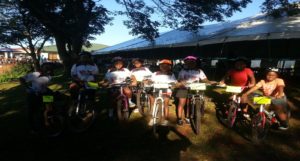 Thanks Rotary Club Empangeni for the wonderful support.